Cows, or cattle, are large domesticated hooved animals with the scientific name Bos primigenius. Cattle are raised as work animals, for meat and dairy products, and for their byproducts such as leather and dung (which is a fuel source and building material). Cattle are highly regarded and protected as a Hindu religious symbol. Cattle were domesticated around 10,500 years ago in Turkey from a heard of only 80 cows and have grown to an estimated 1.3 billion worldwide, with 800 recognized species on every continent, exclusive of Antarctica.

The size and weight of a cow vary widely by breed, but the average weight of one of the most popular dairy breeds, Holstein, is around 1400 pounds and stands about six feet tall.  They can live to be over 25 years old, but the typical age for a cow is five years. Cows are very social animals, using facial and body expressions as wells as moos to communicate with one another in a herd. They also have almost 360 degree panoramic vision and can see in all colors with the exception of red, and an excellent sense of smell, being able to detect odors over five miles away.

Cattle have adapted their unique ruminant digestive system in order to utilize grasses and plants that other animals are unable to digest due to their fiber content. Due to their large size, cows must consume large amounts of food per day. The digestive system itself also consumes a lot of energy due to its complex nature. Cows spend up to six hours a day eating and eight hours chewing their cud a day, totaling up to fifteen hours a day dedicated to eating! The average cow consumes about 30 gallons of water and 95 pounds of feed a day. Of course, these numbers vary greatly depending on breed, size, age, and activity level. In cows the length of full digestion takes anywhere from one to three days, depending on the feed.

Since most cattle are raised for human consumption, with many living in feedlots, there is a lot of interest in optimal feeding practices in order to maximize size and decrease waste. An average dairy cow produces over 100 pounds of manure per day and can add up to over 20 tons of wet manure in one year. Because of fermentation of the ruminant digestive system, cows produce as much as 100 liters of gas per day as well. While manure can be utilized for fertilizer and certain large scale operations can trap gas and use it as a fuel source, the issue of waste management and environmental impact of cattle is a serious issue. Cows produce over 400 powerful greenhouse gases, including methane, which traps more than 20 times the amount of heat carbon dioxide does. Also, most manure is put into giant pits, known as lagoons, that produce even more gas from ammonium and hydrogen sulfide as the manure decomposes and poses a serious health risk if it leaks or overflows and contaminates drinking water, since most livestock waste is not required by law to be treated.

Digestion is the breakdown of food into smaller components that we can absorb and use for energy. The gastrointestinal tract varies greatly between animals and is mostly developed by what they consume. Humans, for example, have a monogastric stomach that secretes hydrochloric acid that breaks down food, but also lacks enzymes that are able to digest cellulose.
Forage consuming species, such as cows, rely on grass as their main form of food and have a ruminant digestive tract that allows the breakdown of otherwise indigestible cellulose in plants thanks to enzymes and protozoa. Other than a specialized multi-compartmental stomach, there is very little difference between a monogastric and ruminant gastrointestinal tract. In order of passage:

1.     Mouth: consists of dental pad, teeth, tongue and saliva
2.     Esophagus: passageway between mouth and stomach
3.     Stomach: consists of four compartments and is main component in digestion (discussed in depth later)
4.     Small Intestine: enzymatic digestion and absorption of protein, carbohydrates and fats
5.     Cecum: pouch that is the beginning of the large intestine; receives chyme from the ilium
6.     Large Intestine: water absorption and waste storage
7.     Anus: lowest opening of digestive tract where fecal matter is extruded 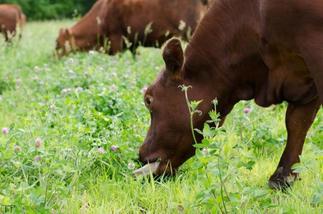 Cattle are a foraging species, which means they subsist on plant material such as grasses, certain legumes and silage. A small number of cattle worldwide are strictly pastured, where they are allowed to feed predominantly on grasses. The vast majority of cattle raised for consumption are fed hay or straw and supplemented with grain, soy and other ingredients in order to increase energy density.

Cows grasp grass with their tongue and pull it into their mouths before biting if off. They have relatively few teeth, with incisors in the front bottom jaw and molars located in the back of the bottom and upper jaw. Instead of incisors in the front of the upper jaw there a hard leathery dental pad and relatively immovable upper lip. Because of this, cows use a side-to-side and circular chewing motion that shreds and grinds the grass and stems into more easily digestible pieces. However, they chew their food very little before swallowing. Later after the cow has ingested a large amount of grass, they will chew their food more thoroughly by bringing food back up their esophagus, re-chewing, re-swallowing and repeating this cycle. This process is called “chewing the cud” and is a main characteristic of ruminant species. Digested cud can flow freely between the first two sections of the stomach and back through the esophagus to the mouth. 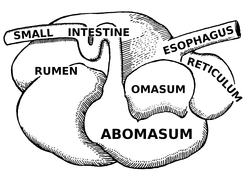 A common misconception is cows have four stomachs, but they have four compartments in their stomach, each with their own unique purpose:

Ruminant species, including the cow, have evolved to consume and digest cellulose-rich roughage. As previously stated, mono gastric species are unable to breakdown this cellulose and usually passes relatively unchanged through the digestive system. Cows produce copious amounts of saliva (25-40 gallons a day) for lubrication, liquid for the rumen, and as bicarbonate alkali buffer in the acidic rumen.
Once food enters the the main fermentation 'tank' (the rumen) it is subjected to microbes that break the otherwise indigestible fiber (cellulose and hemicellulose) into smaller pieces. This produces high quality protein, volatile fatty acids, and B-vitamins. The main byproduct of this process is methane gas, which was previously mentioned.

After the food leaves the stomach, it enters the small intestine where the nutrients that were not absorbed in the rumen are absorbed. The remnants of digestion then travel to the large intestine via the cecum, only to end it journey as manure through the anus.